If you have a bottle of apple cider vinegar in your pantry, you very likely know how valuable this particular staple is to your health. If you are not yet familiar with the many beneficial uses of this versatile and economical home remedy, you may be interested to know it has been used successfully to treat conditions ranging from blood sugar and weight loss to acid reflux and upset stomach. Check out these nine reasons why you should keep a bottle of apple cider vinegar on hand.

How Is Apple Cider Vinegar Made:

In the first step of the process, sugar is dissolved in filtered water that is then poured over a variety of coarsely chopped apples. This mixture is allowed to set at room temperature for one to two weeks until bubbles begin to appear as the sugar ferments into alcohol. (Because the sugars are digested through the fermentation process, apple cider vinegar contains very little sugar and carbohydrates, making it a very attractive food from a dietary standpoint.)

During the second step of the process, the apples are strained out and the liquid is maintained, again at room temperature, for an additional three to four weeks. At this time, the alcohol is transforming into vinegar through the action of the acetic acid bacteria — this particular acid gives vinegar its distinctive sour tang. As the bacteria do their job, a small amount of sediment will appear on the bottom of the container and the “mother” culture will form on top, which is a colony of beneficial bacteria.

In fact, you can quickly recognize organic, raw, unfiltered, unprocessed apple cider vinegar by the distinctive presence of the mother. It appears as dark, strand-like chains of cloudy bacterial foam that are actually protein enzyme molecules and probiotic bacteria. Mother can only exist in vinegar that is not pasteurized or filtered, which means you will not find it in most types of vinegar sold at the grocery store.

While at least one source suggests apple cider vinegar may contain the same nutrient levels as apples, such as vitamin C, B vitamins, magnesium and potassium, there is little evidence to support this assertion, particularly for pasteurized varieties. The U.S. Department of Agriculture’s National Nutrient Database entry for apple cider vinegar is virtually blank and features data for calories per serving and sodium only.

Some assert unpasteurized, unfiltered varieties of apple cider vinegar, such as you’d make at home, do retain some of the beneficial nutrients present in apples. Even so, it’s the acetic acid — a powerful antimicrobial — and to a lesser extent, the malic acid in apple cider vinegar that act on your body in powerful, health-benefiting ways.

Research published in the journal Bioscience, Biotechnology and Biochemistry in 2009 indicates apple cider vinegar can help you lose weight and shed body fat. In this study, 144 obese Japanese adults consumed either 1 tablespoon of vinegar, 2 tablespoons of vinegar or a placebo drink every day for 12 weeks. Other than restricted alcohol consumption, the participants were free to maintain their usual diet and activity levels.

The study authors concluded, “Daily intake of vinegar might be useful in the prevention of metabolic syndrome by reducing obesity.” The weight loss is thought to be influenced by the acetic acid in vinegar, which is believed to suppress your appetite and increase your metabolism, as well as reduce water retention. Scientists also theorize apple cider vinegar interferes with your body’s digestion of starch, resulting in fewer calories entering your bloodstream.

If you are looking to boost your oral hygiene but proper brushing is not doing enough to help you control bad breath, my first recommendation would be to take a closer look at your diet and digestion. If you are eating particularly fragrant (or downright smelly) foods, coupled with infrequent bowel movements, you will most likely suffer from bad breath. One option is to remove foods such as garlic and onions from your diet to see if that makes a difference, but this means missing out on their many health benefits.

You can increase the frequency of your bowel movements by increasing your intake of fiber-rich foods. In addition, you may want to reduce your intake of sugar and starchy carbohydrates, which slow down your system. As a secondary measure, you may be able to fight bad breath by adding 1 to 2 tablespoons of apple cider vinegar to an 8-ounce glass of water and using it as a gargle after brushing.

Be sure to rinse your mouth with plain water after gargling to remove any remaining acid from your teeth, mainly because acid that sits on your teeth will damage your tooth enamel. When done properly, a daily gargle with apple cider vinegar may help kill odor-causing bacteria, reduce unpleasant tastes, prevent dry mouth and eliminate nasty tongue coatings. 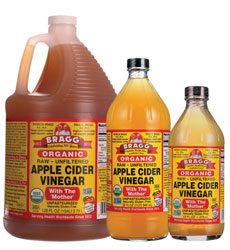 Contrary to what you may believe, heartburn is often caused by too little, not too much, stomach acid. A lack of stomach acid has the effect of slowing digestion. In the presence of too little acid, food and gasses put pressure on your stomach, sometimes causing your stomach contents and some stomach acid to creep back up your esophagus.

If this happens to you on a regular basis, you may want to sip a glass of warm water containing 1 teaspoon of apple cider vinegar about 30 minutes prior to eating. (Some folks add a dab of raw honey to make the vinegary taste more tolerable.) By introducing apple cider vinegar, which has a pH similar to stomach acid, you ensure your stomach will have sufficient amounts of acid to promote proper digestion, thereby preventing heartburn.

At the first sign of a cold, seasonal allergy or sinus infection, reach for apple cider vinegar because it is well-known for its ability to reduce congestion and thin mucus. The thinning of mucus promotes drainage and enables your body to expel bacteria and other infection-causing germs. The presence of acetic acid, which contains antimicrobial properties, has been shown to have the potential to prevent bacteria growth.

Two options for using apple cider vinegar to clear a stuffy nose are:

According to CNN Health, there is substantial evidence suggesting the consumption of vinegar, including apple cider vinegar, can help keep your blood sugar under control. As you probably know, blood sugar regulation is an important factor in reducing your risk of diabetes and heart disease, among other conditions. Professor Carol Johnston, Ph.D., associate director of Arizona State University’s nutrition program, has been studying the effects of vinegar for more than 10 years and suggests it can be useful to control blood sugar spikes for prediabetics and Type 2 diabetics.

Johnston asserts even healthy control subjects have benefited from consuming vinegar. “Vinegar had an impact in all groups, but the most significant impact was in the prediabetic group,” she said. “In prediabetics, it was too good to be true; [blood sugar] fell a good bit and stayed that way. It may be this is the group that could benefit the most.” According to Johnston, the acetic acid in vinegar “appears to interfere with enzymes that break down starch molecules.”

The good news is this antiglycemic response can be induced by all types of vinegar, including apple cider vinegar, because it is the acetic acid not the vinegar type that produces the results. Johnston added, “Basically, what acetic acid is doing is blocking the absorption of starch. If my study subjects eat a starch and add vinegar, glucose will go down. But if they drink sugar water and add vinegar, nothing happens. Vinegar only helps if you are consuming a starch.”

Apple cider vinegar is said to help relieve an upset stomach because:

If you regularly experience leg cramps, which can be so painful, especially at night, it may be a sign your body is either not metabolizing minerals such as calcium, magnesium or potassium well or is losing certain minerals due to a pH imbalance. Contrary to popular opinion, muscle cramps are not an automatic sign you are deficient in a particular mineral. Often, you can relieve cramping simply by drinking apple cider vinegar because it will help regulate your body’s pH. When your body’s pH is properly balanced, it will be able to effectively metabolize and distribute vital minerals.

Once your body’s pH is balanced, your body will have what it needs to properly metabolize important minerals like calcium, magnesium and potassium and the cramps will disappear. Similarly, you can use apple cider vinegar to help resolve eye twitches and other types of nerve pain. Add 1 to 2 tablespoons of apple cider vinegar to an 8-ounce glass of filtered water and drink at the first sign of cramping, twitching or nerve pain.

Another wonderful option for staving off sore throats is to treat each of your ears with a small amount of 3 percent hydrogen peroxide while lying on your side. Upon pouring the solution into your ear canal, you will hear and feel the bubbling and sense a slight stinging in your ear canal. Wait 5 to 10 minutes until most of the bubbling subsides, then drain the fluid onto a tissue. Turn over and repeat the process with the other ear. Do not use this technique if you believe you have an ear infection and the ear drum may have ruptured or opened.

Even More Uses for Apple Cider Vinegar:
Apple cider vinegar has also been said to:

Beyond that, you may find it useful as a household cleaner or a fruit and veggie wash. Some use it as a weed killer. It is also known to neutralize household odors.